Amethyst is one of the several varieties of quartz, which includes Rose and Smoky Quartz. It is a bright, vivid violet that can be dark or a dull lavender shoe. Amethyst is derived from the Greek world “ametusthos” meaning “not intoxicated or not drunken,” as it is capable of warding off drunkenness. It has the power to protect its owner, the wearer, or whoever has it. It is prevalent among ancient Greeks as who wore amethyst to carve off intoxication.

Amethyst has been over years hold in very high esteem for its enchanting and conjuring power it carries to soothe one’s mind, stimulate emotions, and give rest to the mind. In today’s, civilization, Amethyst is a semi-precious stone. On the contrary, to the old civilisation who sees it as “Gem of Fire,” a so precious stone which measures up to diamond itself. The above assertion is due to the abundance of its availability in recent times.

It is found in different areas of the world and its forms as either transparent cluster long single termination or terminated crystal in all sides. The color distribution is uneven, although sometimes, so when cutting care is taken as it is notoriously known to form curved shape fractures when hit too much. 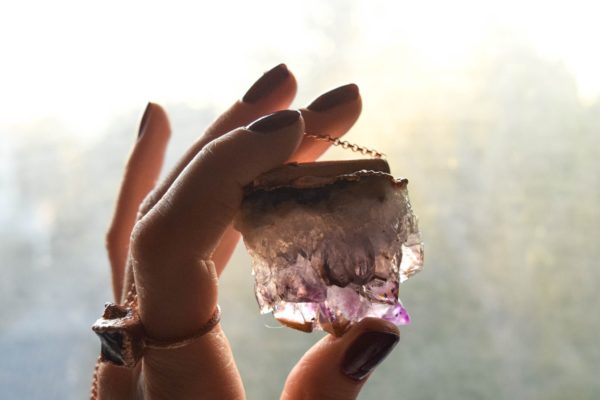 Amethyst Connects us to the divine that is beyond the physical entities. In some tribes such as Hebrew, it is called “Ahlamah,” the ninth stone at the breastplate of the high priest as well as twelfth stone to the new Jerusalem.

Amethyst is widely recognized as a gemstone for spirituality and contentment. It enhances spiritual awareness, consciousness, and soothes the mind. It is popularly known for its metaphysical abilities to help improve focus during meditation

Amethyst also helps to develop the capacity to think clearly and sharpen a decisive mind. It enhances the emotional level that helps in building the skill to recognize emotional patterns. It is worthy of note that it also helps to relieve stress, anxiety, fear, depression, and a heavy mind.

This is a potent gemstone. Different people from walks of life use it. To business people, diplomats, and negotiators, it is essential for anger management, relaxation of the mind and gives a huge advantage when in heated arguments or discussions. It also helps to sharpen the cognitive system and broaden intellectual reasoning.

–Spirituality and Calmness – it serves as the link between the wearer and the metaphysical world.

–Lucid Dreaming- keeping a piece of amethyst under one’s pillow will facilitate lucid dream and somewhat astral flight. It does not only Improve lucid dream but also gives the dreamer the ability to know they are dreaming and the ability to manipulate it. When one holds this amethyst stone during the meditation, it opens up energy and better commune with the metaphysical world.

In the world today, Amethyst has retained its credulity for spiritual growth and bond. It still exercises its power to connect to the spiritual world.

Amethyst is a stone of peace which not only soothes but also calms the soul. It gives calming and soothing dreams by bringing dreamer close to the divine. Its clarity and peacefulness also extend to waking the mind and also birth in mental health.

What is Chakra in Amethyst?

Amethyst is the primary and initial spiritual stone that purifies, heal, and protects the wearer. It works well in bringing tranquillity to mind and one’s crown chakra so that one can focus on healing and loopholes differing one’s enjoyment bliss.

It binds the physical us to the metaphysical realm pulling the High frequency vibrates to open the third eye, which creates a sense of completeness and as a whole enhances productivity and future development.

Amethyst is a Birthstone

Amethyst is the birthstone for pieces and the second month of the year, February. It is associated with the Roman’s water-god Neptune. 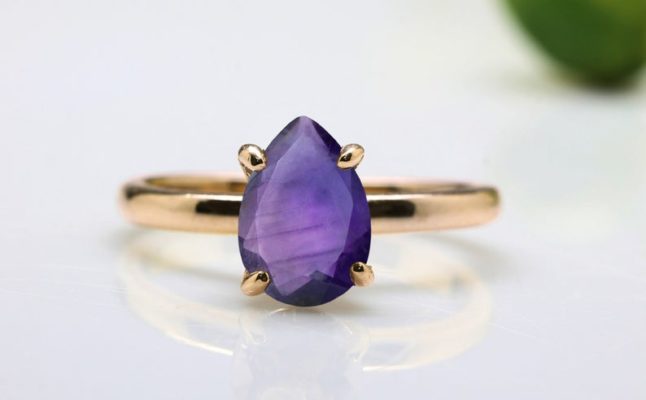 It has the power to strengthen relationships and gives courage to wearers, so anyone that is born in February is believed to emit these features of being fearless and brave.

It is also the stone of St valentine which symbolizes, passion, creativity, spirituality, temperament, and sobriety.